Greenway helps generous people improve their margin so they have more time and more money to pursue what’s most important to them. - Nick Foy, CFP® 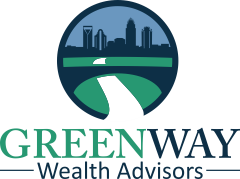 Nick Foy is a Charlotte, NC fee-only financial planner. Greenway Wealth Advisors provides comprehensive and objective financial planning to help clients organize, grow and protect their assets through life’s transitions. As a fee-only, fiduciary, and independent financial advisor, Nick Foy is never paid a commission of any kind, and has a legal obligation to provide unbiased and trustworthy financial advice.

Nick's passion is helping people use money as a tool to maximize their impact on their family, their community, and the world.

He started his career in finance at Vanguard in 2007, where he learned the most important foundational money management and time-tested investing principles. In 2011, Nick left Vanguard to open the Charlotte office of CAVU Wealth Advisors, an independent advisory firm based in California.

In 2018, he formed Greenway to create a firm that served the needs of Generation X & Y clients who tend to have views on money, finances, and retirement that are very different from those of prior generations.

Nick grew up in California and has called Charlotte home since 2005. He attended Miami University in Oxford, Ohio, and completed his Certificate in Financial Planning from the University of Georgia. In 2010, Nick was awarded the prestigious CERTIFIED FINANCIAL PLANNER™ designation.

He married Natalie in 2006, and together they have two children: Theo and Nora.

Nick serves as a trustee at Mosaic Church in Charlotte, and is on the advisory board for the Dreamcatchers Society at Levine Children's Hospital where he also formerly served on the Family Advisory Council.  Additionally, he spends time volunteering as a lunch buddy at Brookstone School.

In the wee hours of the morning, you can find Nick working out with the men of F3 Nation, and you might see him at the pool where he swims and plays water polo.

The National Association of Personal Financial Advisors (NAPFA) is a leading professional association of Fee-Only financial advisors - highly trained professionals who are committed to working in the best interests of those they serve.

We help our clients make better financial decisions so they can maximize their impact.

Greenway integrates the science of modern investing and smart financial planning to provide our clients the best chance of success.

Gone are the days of product sales defining your relationship with a financial advisor. Instead, partner with someone who values what you value:

Customized advice tailored to suit the needs of you and your family.

Money is a tool. Wield it for maximum impact.

Schedule a Call With Me

If you're seeing this message, it's because the web browser you're using to access our site is much older and no longer supported. Due to privacy and safety concerns, we don't allow older browsers to access our site. In order to access WhyFiduciary.com, please use a newer browser, like Internet Explorer 10 or above, Google Chrome, or Mozilla Firefox.